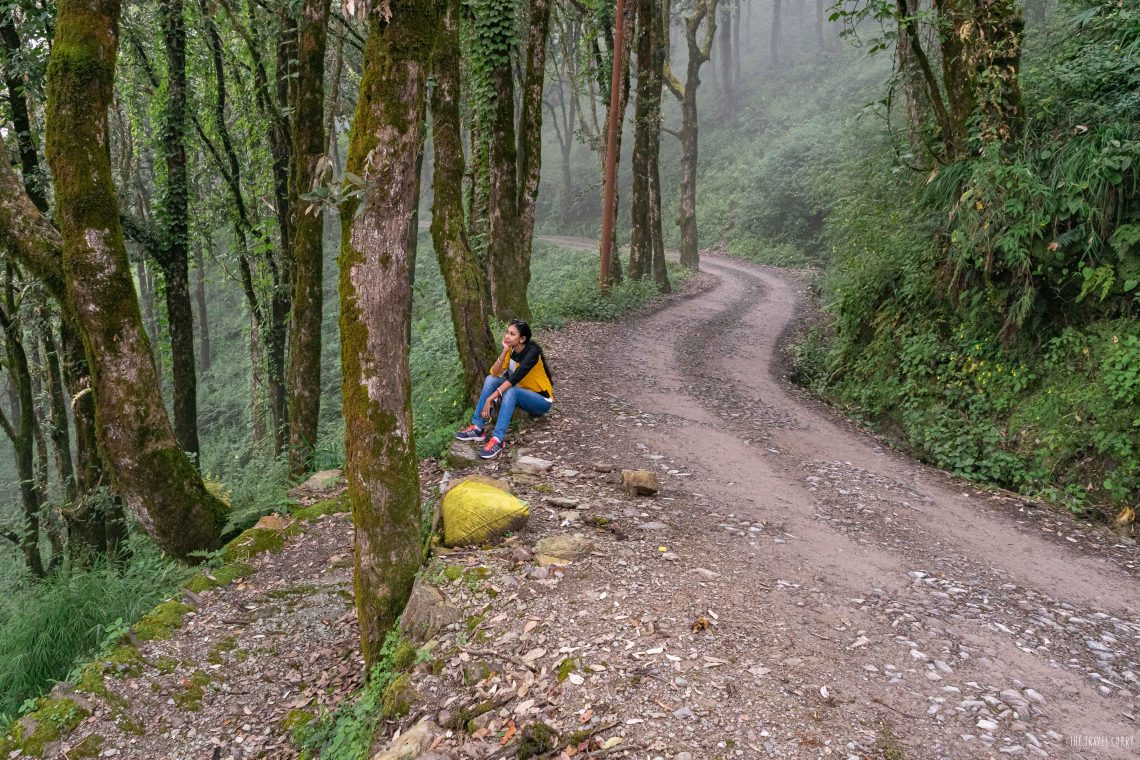 The clearest way into the Universe is through a forest wilderness. – John Muir

And this is exactly what we did! The idea of wandering in the wilderness excites hubby and me both. Avid nature lovers that we are! We had planned our second day in Nainital for trip to the offbeat Kilbury and Pangot.

Located around 13 kilometers from Nainital lies the quaint offbeat village of Pangot. A destination quite popular for trekking, camping and adventure activities, the drive to the village is equally striking. The route that passes through forest zone around the Nanina Devi peak is nothing less than extraordinary.

In the same village, Kilbury Bird Sanctuary is a protected forest area spread over several acres of land. The sanctuary is home to numerous species of flora & fauna and also makes a great place for jungle hiking, bird watching and photography.

Things to do in Pangot

Tourists go to Pangot to relax and experience how nature smiles. The private tour operators offer tent stay, bonfire, group activities, bird watching, trekking etc. in their package deal. Pangot is a place to practically do nothing. Come here one weekend, breathe, unwind and go back home with a refreshed mind!

If you stay in Pangot, we recommend camp stay. The feel is adventurous and unique. A hotel stay is just another stay yeah? Stay in the tents and feel the forest in your sleeve! We are sure jungle animals stray into these places too! No we don’t intend to scare you, but yeah, that might just be another thrilling experience. Needless to mention, group of friends would enjoy a lot.

The journey to Kilbury Sanctuary

The day was cloudy but that did not deter us from visiting the place. As our cab sped through the silent, unspoiled, unexplored roads, the cab driver narrated stories of wild animals often frequenting those routes. The thought of bumping into a wild animal in Kilbury, that too without a guide, scared us a bit but we carried on, leaving everything to our destiny.

The long drive ended right in front of the Kilbury Forest Guest House which was under renovation then. The officials would not have let us enter the forest if our driver didn’t convince them. The shuffling of plant pots, scraping the moss from slippery pathway, transporting gravel; all of it made the place too noisy, killing our hopes to spot any bird that day.

The Sun played hide and seek, making the forest cloudy sometimes and clear the other times. We made our way into the forest without letting the rest house go out of sight.

Trying to be as noiseless as possible, we took each step very carefully, literally like a crouching tiger crouching. That reminded me of the story which my friend Swalay had narrated the previous day. It goes as this- A specie of leopard, known as Guldaar in Uttarakhand, often strays into the tourist spots. Once when he was at lover’s point, the jungle smelled of burnt sack. He left the spot immediately sensing danger. News channels later reported spotting a Guldaar in the same area near Lover’s Point.

Swalay’s story was constantly at the back of my mind, which kept my senses alert.

The forest land had downward slope, with no barriers or barbed wires in site. It seemed very less explored because we barely saw plastic pollution there. The rawness was enticing and we inched further, keeping an eye in all directions.

There were no birds in sight, disappointing us even more. Our purpose of visiting Kilbury seemed defeated, when suddenly a bird coo-ed. We squinted at the thick tree tops but could see nothing. This happened many times but we held on patiently. Well, bird watching needs patience and we better not lose it. We vigilantly looked around and our joys knew no bounds on spotting a Rufous-bellied woodpecker bird. I pointed out in the direction of the bird while Mithun took pictures. In no time, I played the spotter and he the shooter. We made a great team!

Amid the foggy trails, we observed nature blooming around us. Soaking in the pure air and looking at the greenery was sheer bliss. Mithun captured a bright bunch of jungle berries. Looked poisonous to me though.

As we called it a day and walked back, I suddenly saw some black object moving swiftly. I thought it was probably a kid of one the construction workers at the rest house. The black something, I assumed was the kid’s head. But it turned out to be something else! It was the tip of an animal’s tail. “Holy shit!” I shouted with goosebumps all over my body. The tail with black tip was vertically up in the air and then the body of the animal appeared. To me it seemed a hybrid of fox and mongoose. The brown animal hopped on its hind legs looking around vigilantly. Soon I realized it was a pair.

“Shit, what are they?” I whispered in his ear who stood still , staring at them. My reflexes urged me to look for a stone or stick for our defense as I was sure they would attack us. My heart beat ten times faster. I was almost breathless with cold sweat running down my forehead but Mithun was calm composed.

The animals hopped away, vanishing in the deep woods much to my relief. Woah! We later came to know those were called Jungle Cats. We were not prepared for such a surprise. “Weren’t you scared”? I asked him, to which he replied “I wanted to take their pictures, but they were too quick.”

How to reach Pangot

None for Pangot or Kilbury. Even if you are not camping, you can enter the camp side for free. 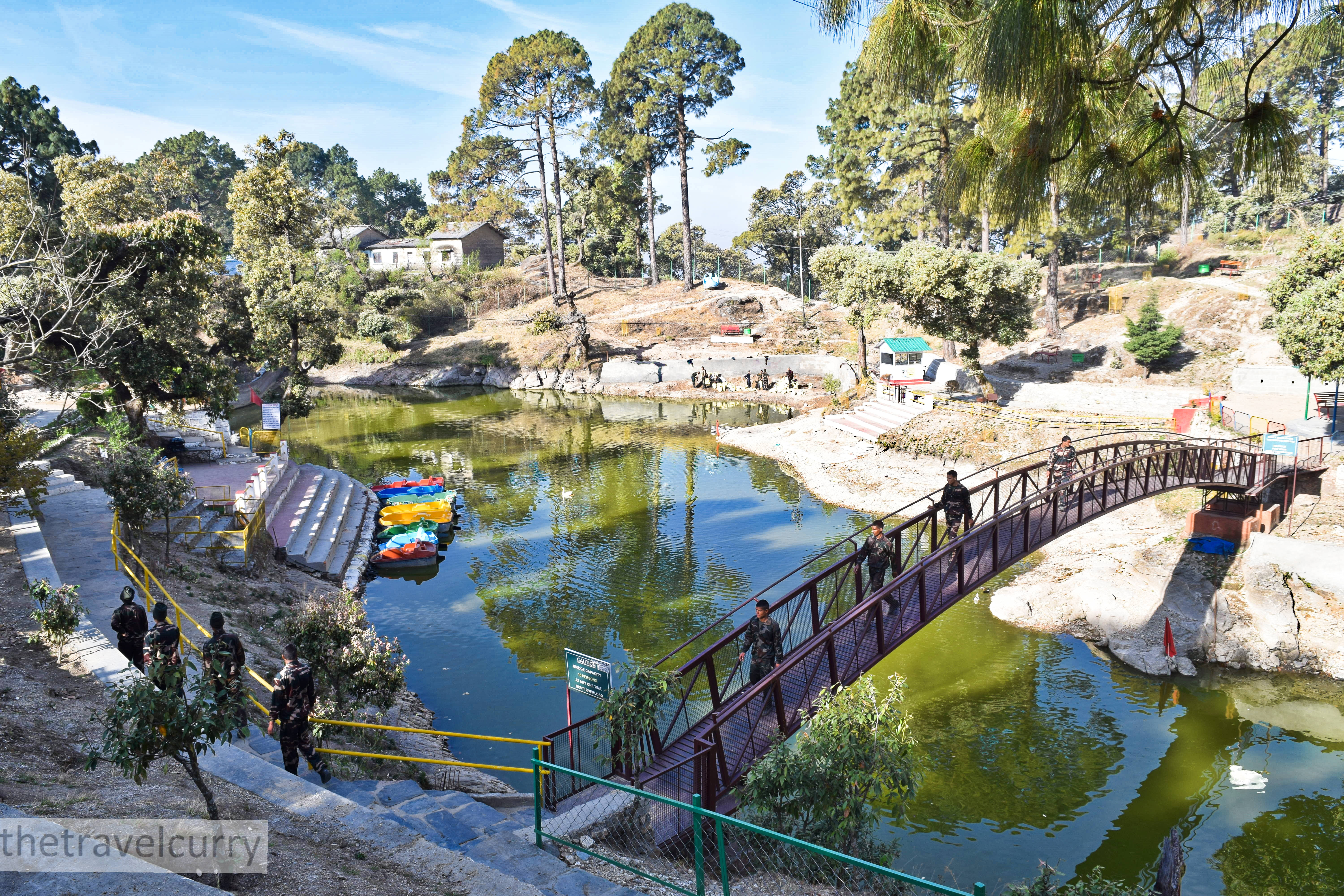 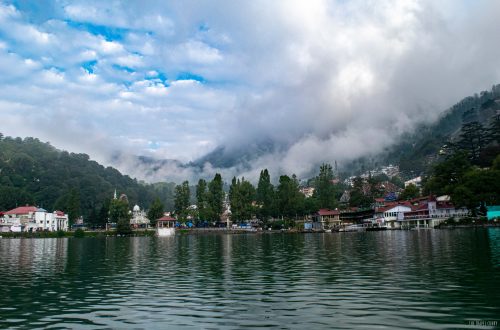 Travel restrictions in Uttarakhand to know about

Exploring the nine wonders of Nainital